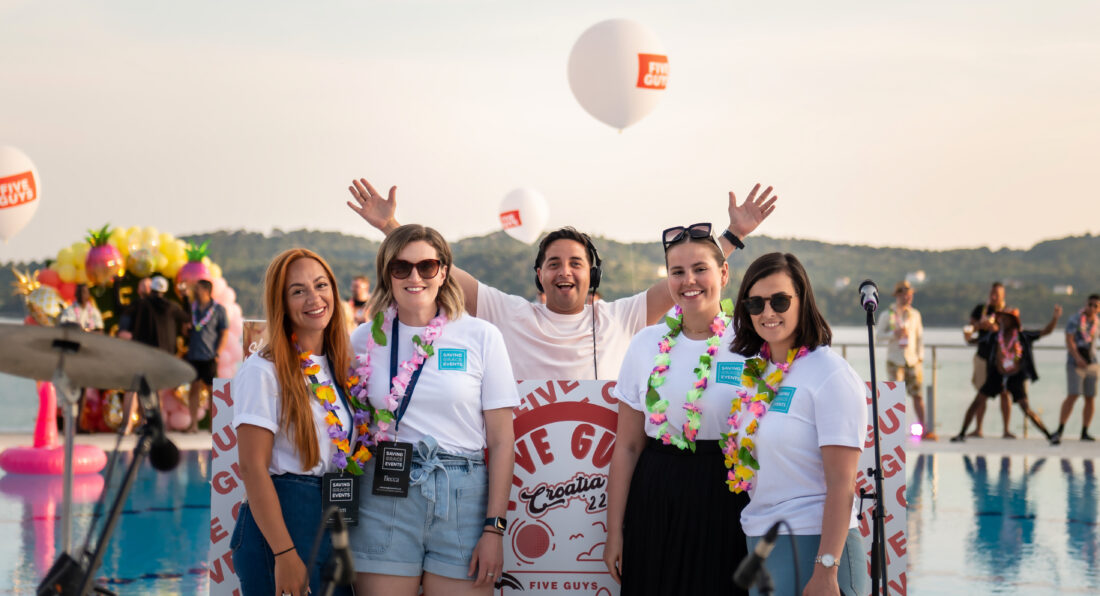 In May 2022, we were tasked with organising an epic team reward and recognition event for restaurant chain Five Guys in Dubrovnik, Croatia! Having previously arranged an event for them in Budapest, we set out to make this year’s event bigger and better than before.

Five Guys are big believers in celebrating their staff. In recognition of their team’s huge effort during the pandemic, Five Guys wanted to reward their 450 General Managers from five countries with a truly memorable experience. The event objectives were also to reinforce what a fun, family-like brand Five Guys are to work for, communicating their brand values:

Integrity: This was shown through motivational talks and a conference, which gave managers the chance to have their work recognised and share future plans.
Get it done: Five Guys say ‘actions speak louder than words’, which is why staff were recognised with such an amazing event abroad!
Enthusiastic: Five Guys know how to have fun. This is why the event ‘went big’, with activities such as an extravagant pool party and pirate ship rides.
Competitive: Five Guys don’t settle for second best, which is why this event was pretty unbeatable.
Family: The whole trip really emphasised getting together after the pandemic and celebrating one another like family! 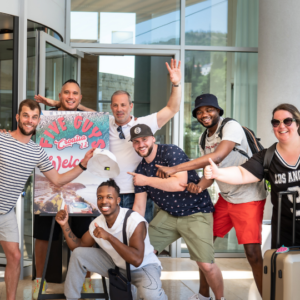 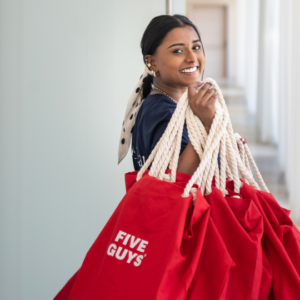 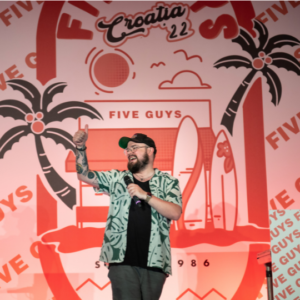 OUR SOLUTION TO THE BRIEF

Our solution to the brief was for an innovative creative events campaign in the form of a three-day celebration in Dubrovnik, which would comprise of five individual events within this short period of time. Handling everything from accommodation to all transport, the plan was as follows:

Day Two – Breakfast, followed by a conference and motivational talk, where each country leader recognised the work from their stores and talked about future plans. After lunch, this was to be followed by a range of excursions on pirate ship-style boats, including a Games of Throne tour.

Day Three – A big, wrap pool party, overlooking the sea, followed by an after party and karaoke.

Branding was implemented across all assets, from backdrops, cushion covers and lanyards to branded booths, props, pool inflatables and floating balloons above the pool. Five Guys brand values were also intertwined within the whole event.

In terms of creative approach, the decor very much revolved around the theme of the sun, the beach, and Five Guys. We tried to make the event very specific to Five Guys experientially and also creatively in terms of location and bringing that to life. Elements of the location itself were also considered, with touches such as having a traditional folk band during the reception. Visually is where most of the creativity plays out.

“Every aspect of how the conference needed to fit together, from breakfast to events, presentations, facilities, and parties… it all worked perfectly and came together beautifully.” 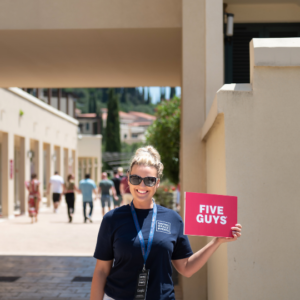 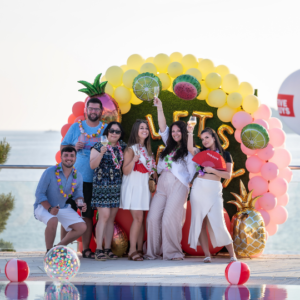 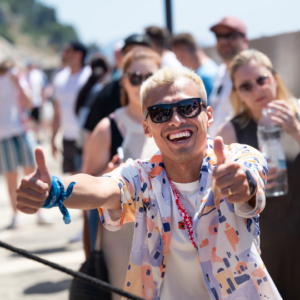 As this was a three-day innovative and complex event, it was not without challenges, including the logistics of planning an international event, navigating customs, and working around local processes when liaising with suppliers. We flew 11 team members out, as well as entertainment and all relevant kit from various different airports around the UK. The pool party also created logistical issues, as having a DJ on a platform in the middle of a swimming pool requires risk assessments. Also, the amount of events content in such a short space of time meant logistically managing many components for a large volume of people. There was also a big risk in terms of uncertainty around what covid restrictions might be in place, with it being an overseas event. All of these challenges were overcome with planning and setting aside extra time for any issues.

“Saving Grace was everywhere and nowhere! Every detail was addressed, but they weren’t obvious so it felt completely seamless. Everyone felt so well looked after right from the moment we arrived. It was the full package from start to finish; all seamlessly put together. They made it look effortless.” 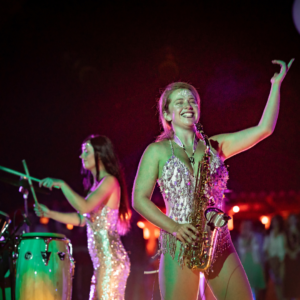 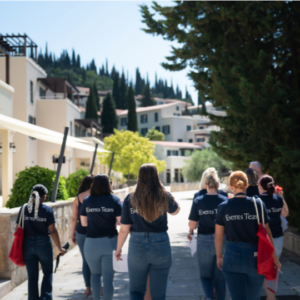 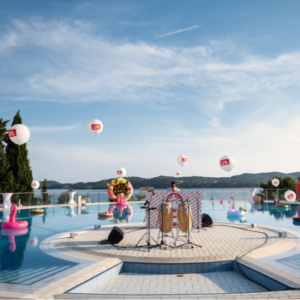 We received amazing reviews and testimonials from team members and the leadership team, with feedback like “we don’t know how you’ll top this next year!” For Five Guys, event success lies very much with overall metrics, such as job satisfaction, performance, turnover, employer surveys, and retention of staff. The client is confident all of this is on track thanks to Saving Grace Events, with a 2023 event collaboration already confirmed.

There aren’t many events where everything goes exactly how it’s meant to go, but the whole three days really did. The whole event meant a lot to both our team and the Five Guys team. Our heart and soul went into this this celebratory event, and it was a major success. What better way to celebrate and reconnect after two years of lockdowns than with a big celebration in Croatia?

“Saving Grace Events managed to blow the roof off this year! They are such an easy and creative team to work with. The team just ‘get’ Five Guys on so many levels. We look forward to working with them next year, and for many years to come.”